Not the Face! Chicago Tech Dodgeball

Two years ago, we started brainstorming ways to foster camaraderie among Chicago tech companies. Of course traditional events serve this purpose - such as meetups and conferences - but we wanted the community to engage in a less conventional way.

Our first idea was to organize an Olympic contest, complete with racewalking, cycling, table tennis, hacking (not an official Olympic event, but necessary for our group) and other events. But things got out of hand with our fencing test run, so we scratched that.

The breakthrough came when someone suggested a dodgeball tournament. Who doesn't love dodgeball? We decided to put on a tongue-in-cheek competition that everyone could get excited about.

We organized the first tournament in March of 2011. We invited roughly 20 companies and 7 accepted. We received some hilarious responses to the invites, as people tried to parse whether we were serious.

On game day, teams were initially timid while trying to feel out the situation and find their mojo. After a game or two, people started having a lot of fun and becoming surprisingly competitive. One person stormed off the court after a controversial call from the ref! At that point, we knew it was the real deal. 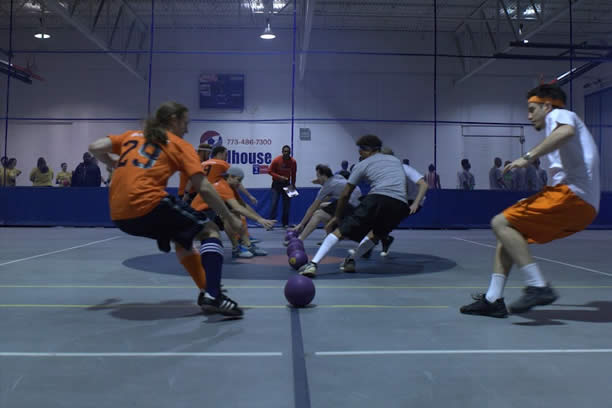 When the dust settled, Braintree came out ahead, winning the tourney. The next few days filled our office with the groans of everyone who had played, saying their body hadn't ached this badly since the Wii first came out. 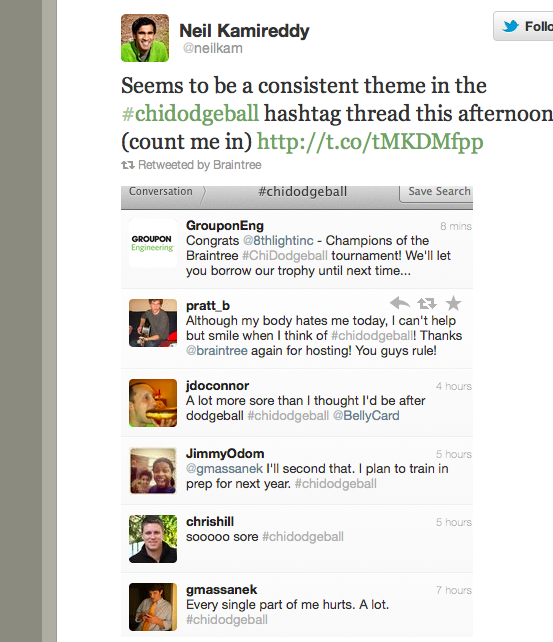 With such positive feedback, we decided to do it again in October of 2011. This time we had 9 teams participate. The competition was more fierce, the uniforms were better, and our overall organization of the tournament had improved. Groupon carried the day and took home our new addition: a 4ft tall grand champion trophy. 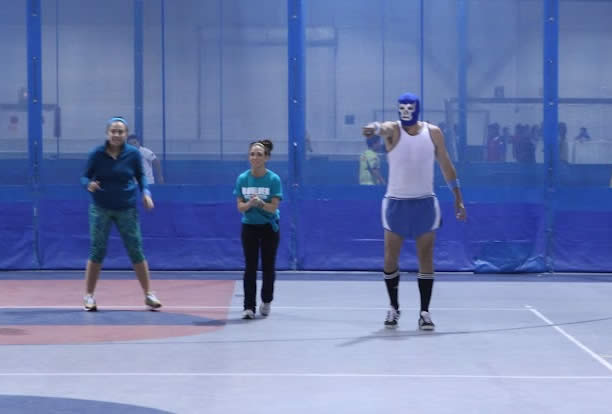 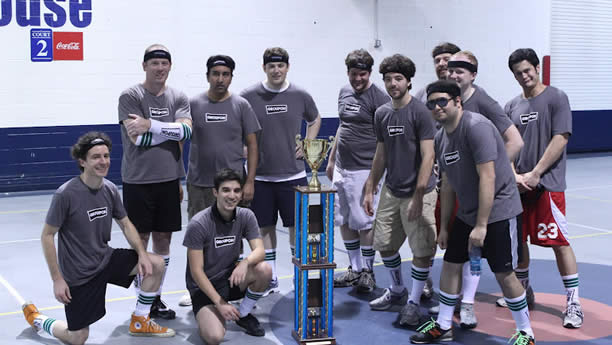 Word began to spread through the Chicago tech community and we soon had companies contacting us to inquire if they could participate in the next tournament. With such high demand, we organized our third tournament this past month.

The official hashtag #chidodgeball exploded as each new team was added to the Braintree Dodgeball page and the trash talk was taken to a new level. A lot of the smack was spearheaded by the reigning champions, Groupon, but this only fired up the competition.

A gem from a couple of the Groupon Devs

It was by far our best tournament yet. The place was packed with 16 teams and dozens of observers. The competition was intense.

In the eight round-robin games leading up to the double elimination tournament, Groupon won first seed but was then shocked by the 16th seed kCura and again rocked by the 8th seed Code Academy. The final round came down to a battle between the teams from Trunk Club and 8th Light. In the end, 8th Light survived and became the champion of the 3rd Chicago Tech Dodgeball Tournament (we were proud of Groupon for letting go of the trophy that they had paraded around from game to game). 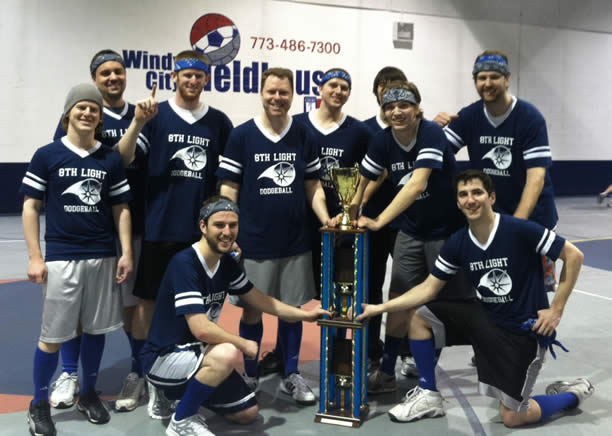 When we first decided to organize a dodgeball tournament, we had no idea how it would be received. In true Chicago tech community form, they have completely embraced the idea and made the event more than we could have ever hoped for.

Thank you to all of the Chicago techies for giving it your all and making the competition so fun. See you back on the court soon!

***
Braintree We enable beautiful commerce experiences so that people and ideas can flourish. More posts by this author